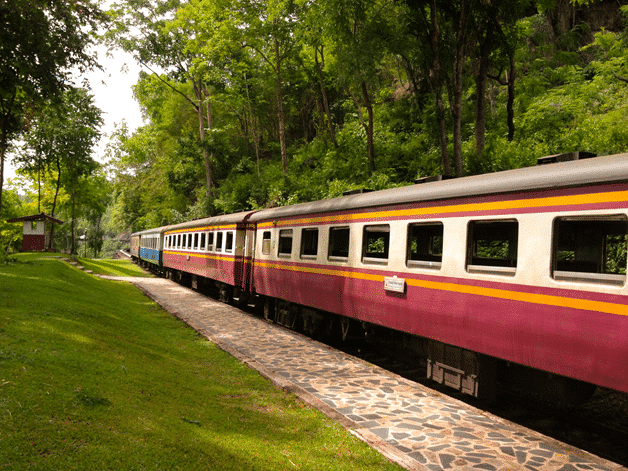 The Railway Man is a war movie directed by Jonathan Teplitzky. Colin Firth and Nicole Kidman are both playing the roles of Eric and Patricia Lomax, the main characters.

The movie is inspired by true facts. This is about a British officer, Eric Lomax, captured by the Japanese in 1942 during WWII. Then, he is forced to participate in building the railway linking the city of Ban Pong in Thailand to Thanbyuzayat in Burma. Thereafter, Eric Lomax wrote a book, an autobiographical novel. It was published in 1995.

Filming started in 2012 and took place in several parts of the world. First, in Scotland, in Edinburg, Eric Lomax’s native city. Then, in England, in Thailand and in Australia. Some scenes were even filmed in Kanchanaburi province, near the reel period railway.

Eric Lomax, a British officer, was captured by the Japanese in Singapore during the WWII. Then he was sent to a Prisoners of War’s camp in Thailand where he was forced to work on the construction of the railway linking the city of Ban Pong in Thailand to Thanbyuzayat in Burma. Years later, he is still suffering from post-traumatic stress disorder. His second wife, Patricia Wallace, determined to rid him of his demons, discover that the young Japanese officer who still haunts him is still alive. Should she give Eric a chance to confront the man who tortured him?

Hintok River Camp @Hellfire Pass sits on a mountain ridge overlooking the River Kwai in Kanchanaburi. This glamping site is near the world famous historical site, Hellfire Pass. Spread across a grassy lawn, each spacious stylish safari tents is an oasis of the comfort with en-suite bathroom, individually controlled air con and spacious private verandas.

Guests are welcome to use one of the camp’s mountain bikes. Close by is ‘Hellfire Pass trekking trails’ and ‘Hellfire Pass Museum’, must-visit World War II sites. It is home to the famous ‘ railway cutting’ built by the Prisoners of War.

Other popular guest activities include the wading in natural spring pool or enjoying a barbecue campfire dinner under the moonlight and dazzling stars.